Behind the scenes with Eugene: Eugene and me grew up together so their was a lot of laughter about memories. Some of those memories were about  how Eugene is a adrenaline junkie and would do wheelies on his bullet bike do 90 mph.

Since then eugene has calmed down a lot more and saved his adrenaline for the race track where he can really enjoy the speed of his bike.

Another aspect of the interview that isn’t shown is Eugene loves to tell lots of details about the story so we worked hard to get details but condensed the story.

Melanie and Jayde are coordinators for Hands- a volunteer program to interact with those who have special needs through art. They enjoy a rewarding association with those they help and those who show up to help them. Watch now to learn more about what they do to help keep this program running.

Jake oh who is originally from South Korea talks about what brought him to America. He also explains how he is developing his passions for graphic and web design. Jake enjoys playing table tennis and was able to connect with LDS Missionaries by playing with them.

Jake is a talented Graphic and Web Designer who also specializes in ping pong. Get to know in a little more here in this short video clip.

Jake Oh is Jake is a Student here at BYU-Idaho studying web design. He loves being here in the United States. He is into drawing and creating websites that is why he in a web design major. Jake really enjoys playing Table Tennis and feels like he is pretty good at it. Here is a little more about Jake in the video below.

My topic for this info graphic is what are the top favorite genres of music. This will require some research around campus. I chose this category because I think it is interesting to see what peoples favorite music is. As I was doing research I saw some info graphics that gave me an idea of some cool ways that I think I can portray this topic.

Here is my Research: https://www.pinterest.com/plumb0079/infographics/

My three versions of my hook are:

Music through out the generation
Top types of music.
What is the best music.

At BYU-Idaho there is always a lot of dating going on! It is something as mormons we do a lot. As a way to getting great dating ideas as well as have some fun we went around asking people what is the most creative Date they have ever planed or been on. Hope you all enjoy!

The goal of this project is to create a logo that defines the identity of me and is able to portray a feel of who I am and what I can accomplish as a graphic and web designer.

To accomplish this goal I began with a Facebook survey to understand more about what comes to mind when people think of me. Answers that came from the survey focused around drive and determination. With that I also really wanted to convey the idea of being a dynamic designer that can handle many different projects.

Research
With ideas about what I wanted to communicate with the logo I began to research and focus what makes a logo successful. I found that having a concept behind the logo is really what made it successful. Logos need to communicate who or what the company is but in order to do that they need a big idea to grasp onto. Once idea was formed then the focus was on aesthetics of how the logo would look.

Sketches
I wanted my logo to really fulfill this idea of thinking visually but also have a feel of drive behind them to accomplish a goal. To get that I focused on one of the basic tools of design and that is a pen. A pen is really where most things start in design. Actually physically drawing. As well as being a physical tool it is also a tool in illustrator, really one of the most notable tools in adobe illustrator.

Taking that and the idea of the mind as the source of ideas and thinking things out I came up with some sketches.

Logos
These are the logos that came from the process of thinking about and idea to sketching one out and then refining. I feel like each one of these logos address the problem of creating a visual identity very well.

The first logo puts a brain on a pen as the idea of that driving creativity instead of a hand holding it. The next logo focuses more on me but approaches it in a more abstract way. This shows the idea of creating visual interest and thinking about a problem visual. The last logo really focuses on the idea of having a direct goal and focus in design, hence using a cross hair like shape with a pen head in the center.

Some of the problems that really came from these logos were how to create some contrast to add a more dynamic feel to these logos. That was created with the subtle changes in color from the main colors to either grey or a subtle change in red as with the 2nd logo. 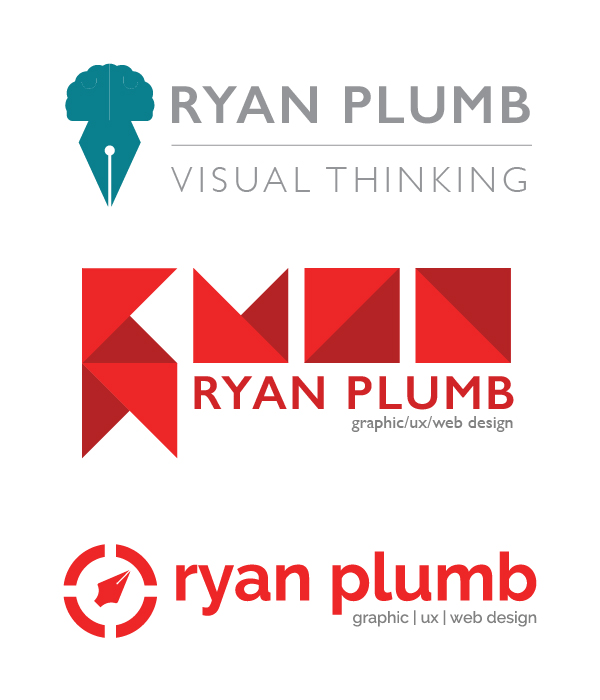 My favorite logo is the last logo because I feel like it really portrays the idea of being a designer that is focused and driven to create great work.

For this weeks progress on the identity project I continued doing research to try and find what it was that would help me to create a personal logo.

Once I felt like I had seen enough of research I went to work sketching. I did a few sketches and then walked a way for a little bit to let my mind think about some concepts. The next day I went back to sketching and really tried to have some concept behind the logos. I focused on branding my self as a visual thinker. With that thought I found myself sketching things like thought bubbles, brains, pens and even some wifi looking icons.

From these sketches I sought some feed back from some friends and then started vectorized the ones that I liked. Here are the logos that I have come to. Thoughts would be appreciated. I am focusing on refining what I have as well as working on color.